Sign up for our newsletter for information on our latest products and promotions.

Please confirm that you are of legal age to purchase alcohol in your region.

You currently have an active checkout session open already, would you like to clear it?

This bottle was featured in mini form on Day 20 of our 2020 KWM Whisky Calendar.

Full-sized bottles can be found here.

Part of the new core range from Balblair Distillery, which focuses on age statements rather than vintages. Bottled at 46% after maturing in ex-Bourbon and finishing in First Fill ex-Sherry Seasoned Spanish Oak Butts. Bottled at 46%, unchill filtered with no colouring added. 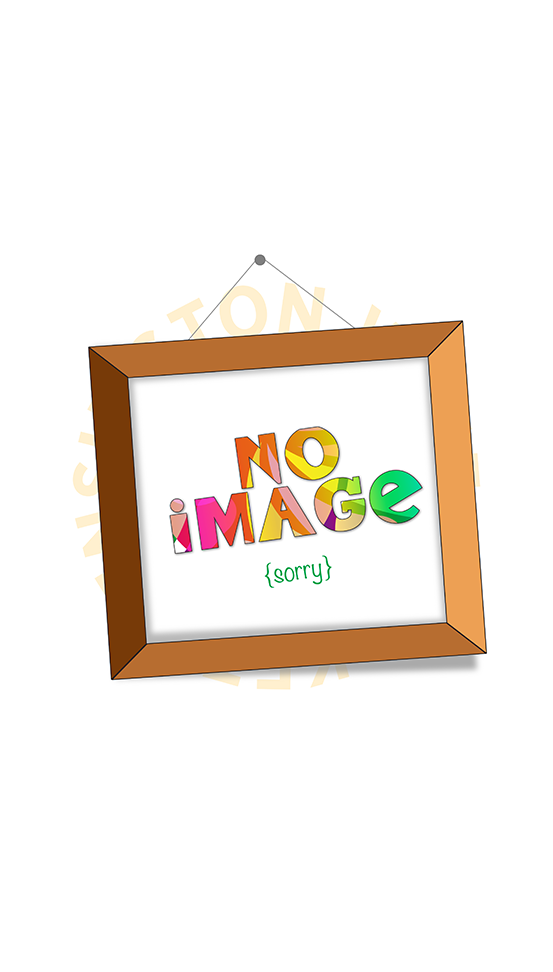 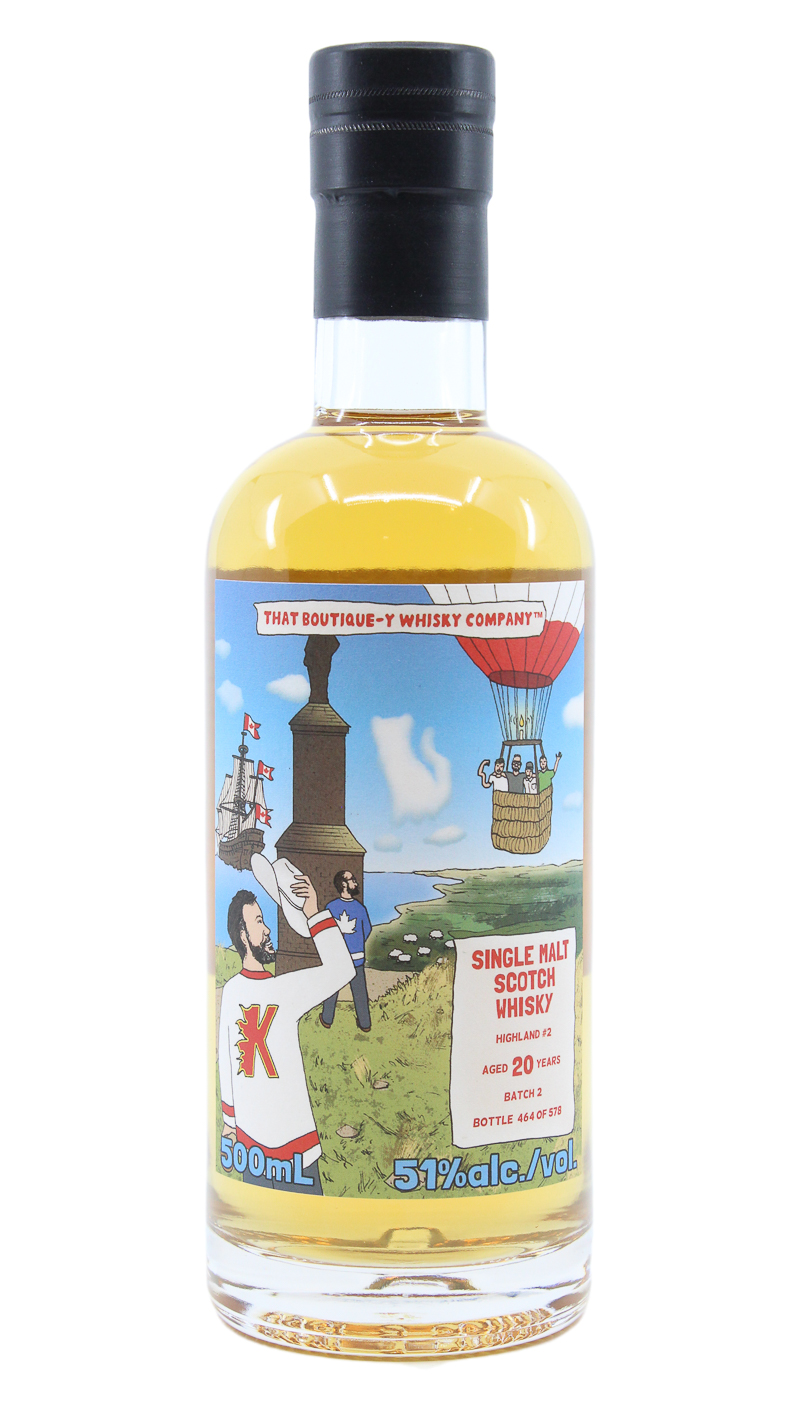 It is finally here... we have been teasing and talking about this whisky for months, and it was worth the wait. We are thrilled to introduce you to our first ever KWM exlcusive single cask from That Boutique-y Whisky Company. Although the bottle doesn't explicitly tell you which "Highland" distillery the whisky is from, there are clues on the label... 578 bottles have been filled exclusively for Kensington Wine Market at 51%. But we have nothing holding us back from telling you that Boutique-y Highland #2 is Clynelish... That's right, this is 20 year old Clynelish!

Andrew was joined by Sam and Dave from That Boutique-y Whisky Co. to talk about the whisky, and the provocative label! 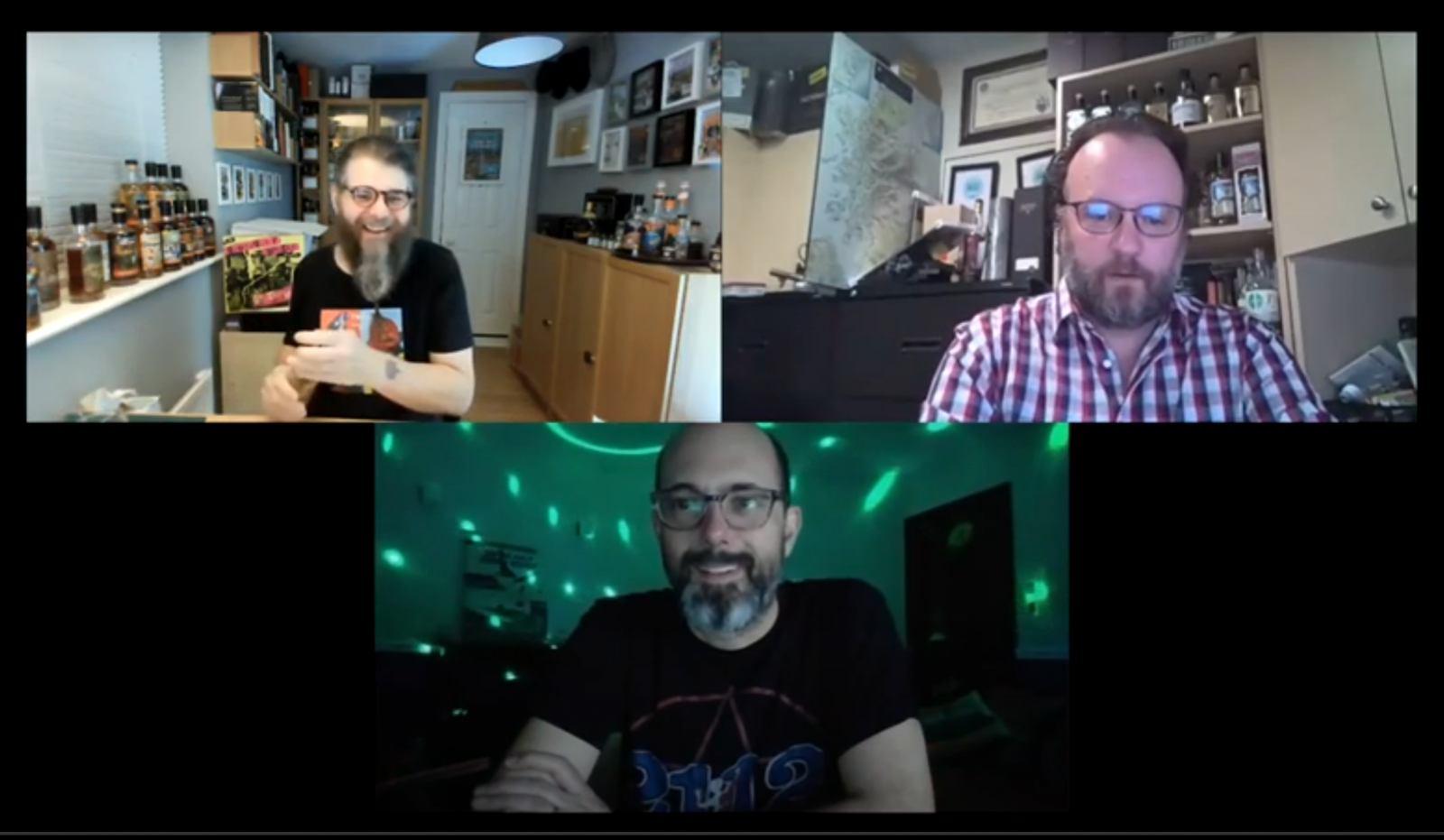 Andrew's Note on the Whisky & Label

Could that be a cat in the clouds, a Wild Highland Cat perhaps? Is it not strange to see a waxy candle-powered balloon? Incidentally, it is lifting the KWM whisky team aloft. And what of the monument? If we told you it was a controversial monument near the town of Golspie dedicated to the infamous Duke of Sutherland, would that give you all the information you need to know? What Highland Distillery has a Wild Highland Cat as its symbol, a waxy profile, and an infamous Duke as its founder?

This label is a cheeky take on a shared memory, with embellishments, embedded details, and Easter eggs, in the tradition of the best Boutique-y Whisky Company Labels. More importantly, it tells a story, which is personally important to my family. My mother was born into the Clann Gunn in New Glasgow, Nova Scotia. Her ancestors roamed swaths of what is now Caithness and Sutherland in northern Scotland. That is until they were compelled to leave Scotland in the late 18th century, cruelly and rudely displaced to make way for sheep during the early days of the Highland Clearances.

On the label there is a ship at sea, heading to Canada presumably, as hinted at by the flags (the Canadian flag as it is today was only introduced in 1965). On the flat coastal plain at the base of the mountains sheep can be seen grazing. In front of the monument stand a pair of Canadians stand in hockey jerseys. Sam Simmons, Head of Whisky at Atom Brands, and a native Torontonian, stands closest to the monument in what appears to be a hockey jersey. Further back, a native Calgarian, yours truly can be seen waving a white hat, an iconic symbol of "Cowtown", whilst sporting a local hockey team jersey of his own. In the balloon Keith, Evan, Shawn & Curt can be seen waving at Andrew & Sam below. Speaking of those two, what are they doing atop Ben Bhraggie? Funny story that.

When TBWC offered us this cask of Highland Malt, they asked us what we wanted on the label, and I had a cheeky idea. In 2006 I made my first trip to Scotland, and on that trip, I hiked up Ben Bhraggie, a small mountain (really a foothill by Canadian standards) to see the monument of the infamous Duke. Someone had spraypainted the word "Monster" in neon green at the base. When I was sure no one was looking I dropped trow and relieved myself on it. I sent Sam an email of this tale, my connection to the area and my idea for the label. I was sure it was just a little too edgy...

Minutes later my phone was ringing... it was 3 AM in the UK, but Sam wanted to make sure I had seen his reply. He too had hiked Ben Bhraggie in 2005, and he had also paid his own respects to the infamous Duke of Sutherland...

One last little nugget, Keith, who is a personal trainer and headed to Beijing as a Team Canada Skeleton coach, felt his arm didn't look appropriately burly, in an early draft of the label. So we had the artist, Emily Chappell, 'bugs bunny' his arm... In case it isn't already apparent, nothing is sacred (especially when it comes to The Duke of Sutherland and Keith's pipes)!

And the rest as they say is history. On the back of every bottle, That Boutique-y Whisky Company includes the following text: "We are passionate about great whisky, we don't take ourselves too seriously and we LOVE a good story." No wonder these chaps are such a great fit to work with!

Distilled in 2008, this 13-14-year-old Tobermory was matured in a Sherry Butt, cask 900166, before bottling at an impressive 64.8%. This is our first ever single cask of Tobermory, and it is a massive and sherried coastal dram! 504 bottles in total.

A missive from Evan on this bottle, and Tobermory in general:

The spirit distilled by Tobermory typically falls into the sabre-rattling love-it or leave-it categories with most whisky fans. There is no middle ground: a vast and barren no man's land keeps these conflicting groups apart. As you would guess, I am well-dug into the trenches on the love-it side of the battlefield. So is my comrade in arms; Harmony. She and I happily spread the good word of Tobermory and Ledaig with evangelistic fervour to all who would listen. Sadly, Curt and Andrew - being the philistines they are - have found less to enjoy from this remarkable island distillery. Keen to wallow in their closed-minded wrong-headedness, they spend much of their spare time rabble-rousing and lobbing insults at us from the safety of their pathetic ditch across the way.

Amazingly, this specific and singular single-cask of Tobermory has managed to create a sort of detente, with the four of us being so utterly impressed by the cask sample we tasted of this that we had to have it for the store. Andrew's own tasting notes mention something akin to Ledaig simmering in the depths of the high-octane liquid (64.8% ABV!). I believe he means that as a compliment. If that is true, then it is truly shocking, but I have no choice but to agree! We are all glad we selected this single cask, which is unpeated but bursting with flavour nonetheless.

Scroll down to find my tasting notes which are sure to provide you with even more reason to join Harmony and me on the front lines, fighting the good fight and defending against any haters. For, this isn't just another bottle of whisky: it is a rallying cry meant to be taken up by all Tobermory lovers everywhere! 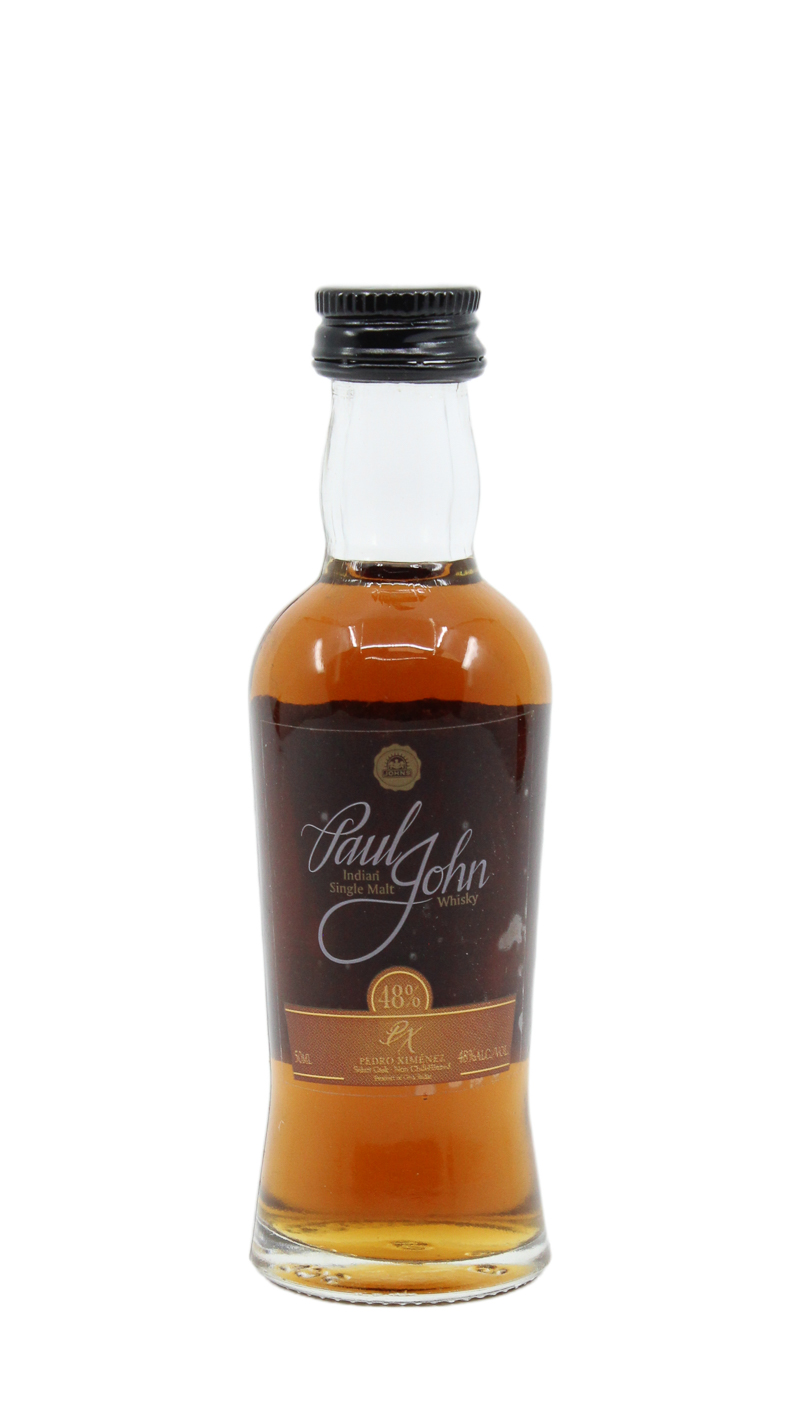 This Paul John expression has been bottled at 48% after finishing in PX Sherry casks. You can find the full-sized version here.

This bottle was featured on Day 3 of our 2022 KWM Whisky Calendar. 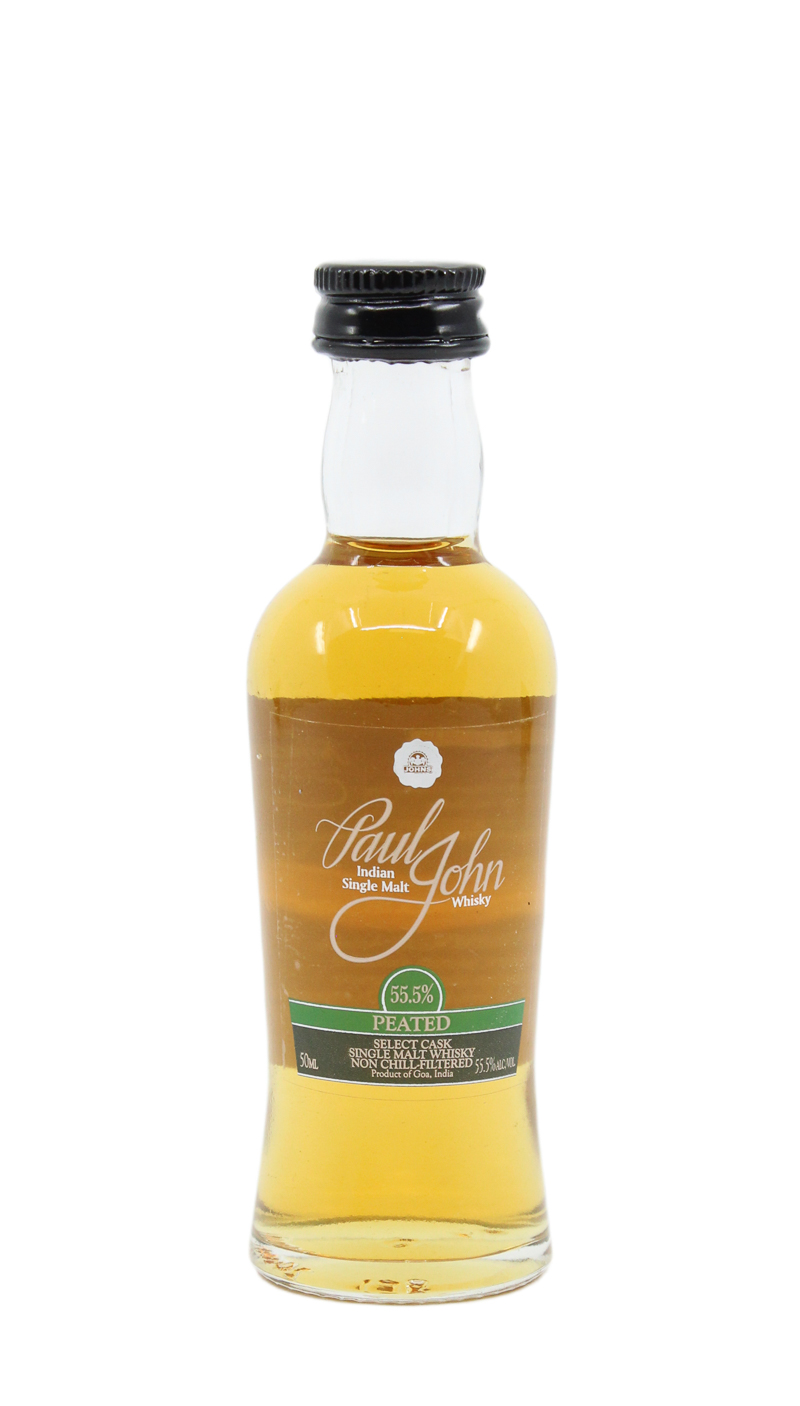 Full-size bottles can be found here

This is a peated cask-strength Indian single malt whisky from the state of Goa. Matured in Ex-Bourbon barrels before bottling at 55.5%. 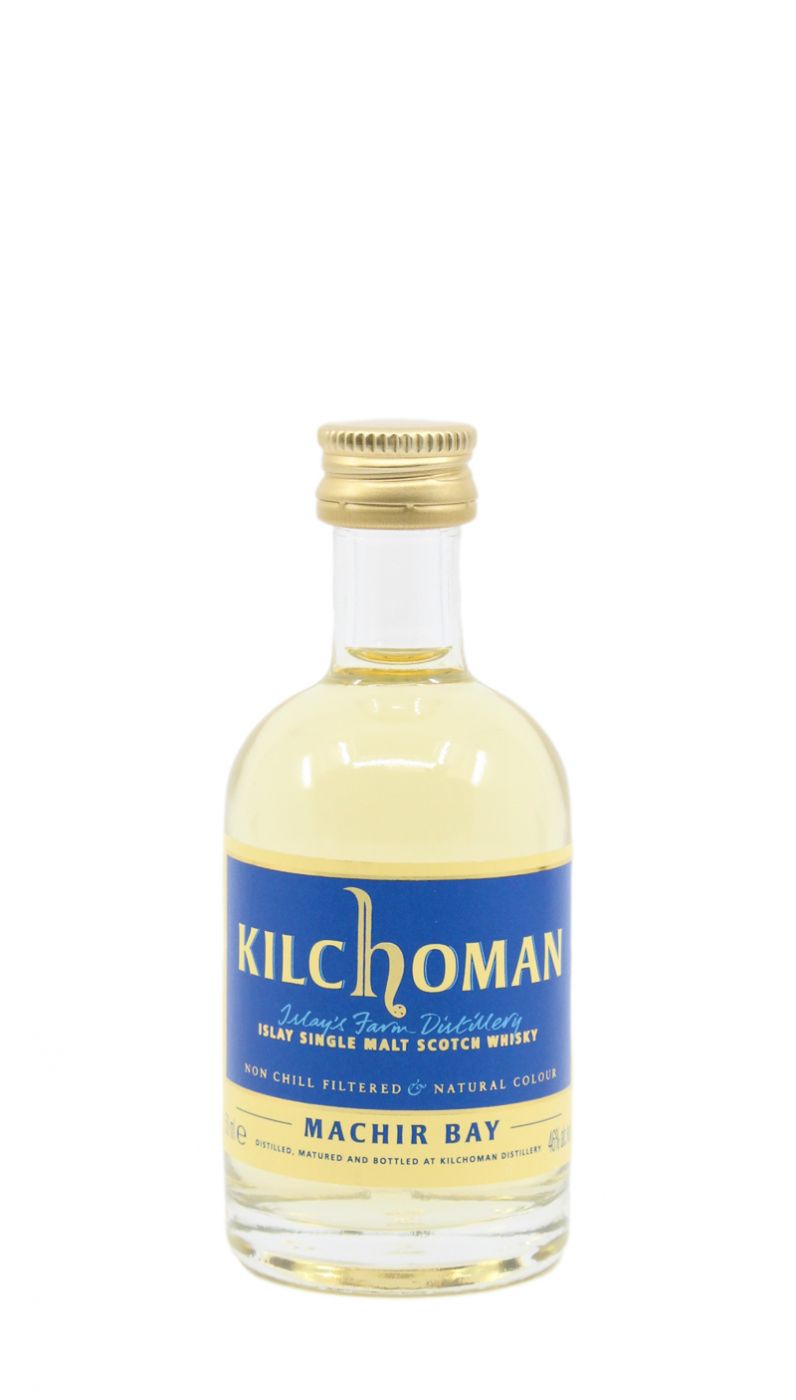 The Kilchoman Machir Bay is matured in a combination of ex-Bourbon and ex-Sherry casks, but much heavier on the ex-Bourbon side of things. The peat level of the malt is around 50 PPM and sourced from Port Ellen Maltings. This is the same spec that Ardbeg Distillery uses. Thanks to its peaty profile and mostly ex-Bourbon cask makeup, Kilchoman’s website states that the main traits of this bottling include “Citrus fruit, layered vanilla and butterscotch”.

This 50ml / Mini bottle was featured on Day 6 of our 2022 KWM Whisky Calendar. Full-sized bottles can be found here.

The distillery's flagship single malt is matured in 1st Fill ex-Bourbon and STR casks before bottling at 46%. This Lowland single malt was made using Fife barley. The Kingsbarns Distillery was founded by the Wemyss family, who also own Wemyss Malts, an Independent Bottler!

This bottle was featured on Day 16 of our 2022 KWM Whisky Calendar. You can read the blog post here.

It's been years, but it is finally back in stock... bottled at 12 years of age and 43% after maturing in Oloroso & PX Sherry casks.

Scotch and Other Whiskies Categories

leave checkboxes unchecked to search through all